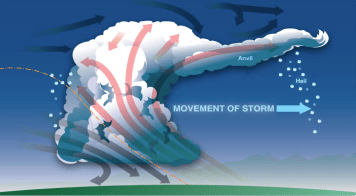 The Thunderstorm Threat APRIL 10, 2017 BY GENERAL AVIATION NEWS STAFF 1 COMMENT By ED BROTAK With the onset of warmer weather, pilots face the increased risk of encountering thunderstorms. Although more common in the warmer months, thunderstorms can occur even in the winter, especially in the southern states. It’s estimated that 100,000 thunderstorms occur […]

With the onset of warmer weather, pilots face the increased risk of encountering thunderstorms.  Although more common in the warmer months, thunderstorms can occur even in the winter, especially in the southern states. It’s estimated that 100,000 thunderstorms occur in the U.S. each year. Some locations in southwest Florida have 100 storms a year, but thunderstorms do occur in all 50 states.

Thunderstorms are most common in the late afternoon, but can occur at any time of the day.  Technically called convective cells, a thunderstorm can cover an area from 200 to 1,000 square miles. Storms can range in height from 10,000 feet to over 60,000 feet. Individual cells can last from less than a half hour to many hours.

THE DIFFERENT TYPES OF THUNDERSTORMS

There are different types of thunderstorms that develop under different conditions. “Air mass thunderstorms” typically develop in the late afternoon and evening due to the heat of the day. Development tends to be random, but they are more numerous over mountainous terrain. Although relatively weak, they can still pose problems and should be avoided. Fortunately, air mass thunderstorms tend to be slow moving.

A greater threat is posed by organized convection. These are stronger storms that often move quickly, up to 60 mph. They are often associated with fronts, especially ahead of cold fronts.

“Squall lines” form when convective cells develop in a line in response to prevailing atmospheric conditions. The line can extend for tens or even hundreds of miles. Although there are breaks between the cells, circumnavigation or remaining on the ground until the line passes is strongly recommended. Individual storms will die out only to be replaced by new cells, with the whole system lasting for hours.

It’s a good time to review the risks thunderstorms pose to aviators and what you can do to minimize the danger.  Many things are happening inside a thunderstorm cloud (cumulonimbus) that they pose a wide variety of threats to aircraft.

Lightning can certainly do some structural damage and affect electrical equipment inside a plane.  Hail, which can grow to the size of softballs, can damage windshields and the exterior of the aircraft. The occurrence of hail indicates sub-freezing temperatures at some height in the cloud.  Even with the warmth of summer, towering thunderstorm clouds easily reach and exceed the freezing level. This also means super-cooled water and the risk of icing is present.  One of the more subtle threats thunderstorms produce is erroneous aneroid altimeter readings due to the rapid pressure changes the storm induces. Readings may be off by 100 feet.

But by far the greatest risk is turbulence. Updrafts and downdrafts within the storm can easily reach 50 mph (73.3 feet per second) and can reach 100 mph (146.6 feet per second). Planes can literally be torn to pieces by the turbulence generated between the up drafts and down drafts.  Even if there is no structural damage to the aircraft, loss of control is a distinct possibility.  And obviously within the cloud, IMC exist and the risk of Controlled Flight into Terrain (CFIT), especially in uneven terrain, is great.

And keep in mind that convection can develop very quickly. What was VMC everywhere can quickly contain areas of IMC.

Dangerous weather conditions are not limited to within the storm cloud itself. Turbulence above the cloud top can extend upwards for thousands of feet.

Interestingly, the massive core of the storm can actually act as a solid impediment to the prevailing winds, almost like a mountain. Clear Air Turbulence (CAT) can be produced in the air flow downwind of the storm and extend tens of miles.  Beneath the storm cloud base, conditions can also be treacherous. Blinding rain and even hail can extend to the ground. IMC conditions are common.  Extreme downdrafts, called downbursts or microbursts, can occur even without precipitation. Once these downdrafts hit the ground, they can spread out, sometimes for tens of miles, producing strong, shifting winds that can exceed 100 mph, and the dreaded wind shear.

Before you start your flight, your preflight weather check, including TAFs and FAs, should highlight any convective problems.  Particularly note any CONVECTIVE SIGMETS, forecasts that warn of dangerous flying conditions due to convection in the next two hours.

But keep in mind, it is impossible to predict exactly when and where thunderstorms will develop in advance. And convection can develop rapidly, sometimes in a matter of minutes.  Closer to takeoff, you can check the latest METARs and PIREPS to see if convection has been reported.

Weather radar is the best tool for locating and tracking thunderstorms. The heavy rainfall rates associated with convection are well depicted as areas of yellow, red, or even purple if hail is present.  Movement and changes in intensity can be determined by tracking storms over time.

Major terminals are well covered by land-based radar. Terminal Doppler Weather Radar can detect thunderstorms and even wind shear near an airport. Larger airports also have specialized wind shear monitoring equipment for the runways. Smaller GA airports are often not as well equipped.

IT’S UP TO YOU

It’s up to the pilot to determine thunderstorm risk…